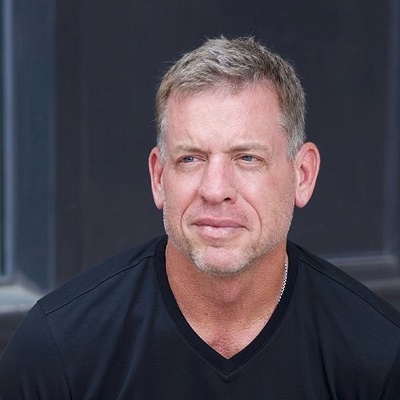 Troy Aikman is a former American football quarterback who played in the NFL for 12 consecutive seasons with the Dallas Cowboys after graduating from UCLA. The number one overall draft pick in 1989, Aikman played as the Cowboys’ longest-tenured quarterback. During his career he led the team to three Super Bowl victories, was the Super Bowl XXVII MVP, and was a six-time Pro Bowl selection. He was inducted to the Pro Football Hall of Fame in 2006 and the College Football Hall of Fame in 2008.

Since 2001, Aikman and Joe Buck have served as Fox Sports’ top NFL broadcast duo, calling six Super Bowls together and earning three Emmy Award nominations and the Walter Payton Man of the Year Award. In 2022, Aikman and Buck signed on as the new team for ESPN’s Monday Night Football.

Throughout his career, Aikman has engaged in several successful business ventures outside of football. Most prominently, in January 2022, he founded EIGHT Elite Light Lager, a disruptive newcomer to the light beer category. EIGHT is a refreshing light lager made with organic ingredients and no adjuncts or cheap fillers, and is brewed for those who, like Aikman, never settle.

All Sessions by Troy Aikman